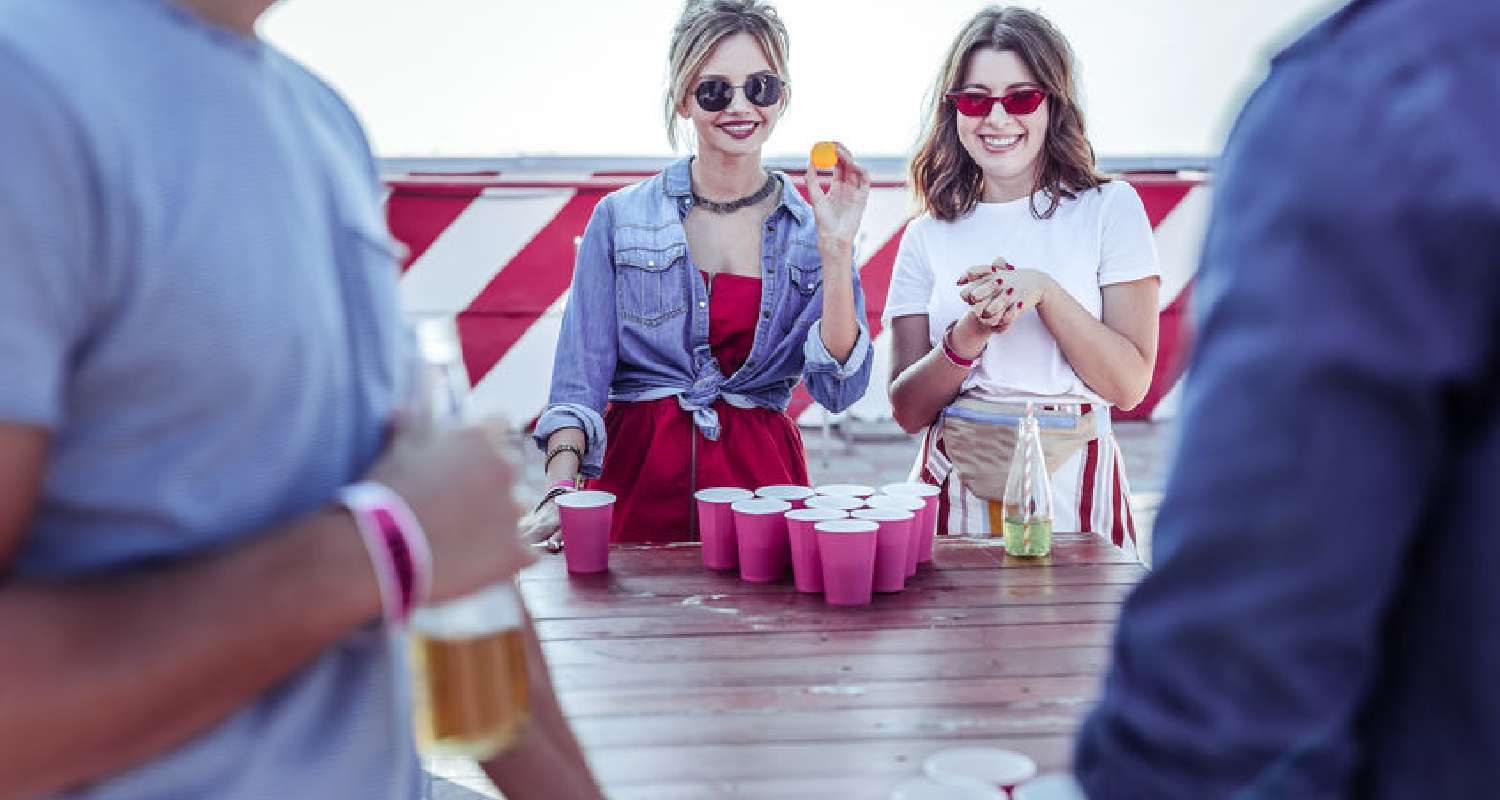 Beer pong is one of the most commonly played games at parties, all around the world. Given its popularity as a drinking game, there are variations to beer pong rules of the game and how people play it in different parts of the world.

Here, we take a closer look at all you need to know about beer pong.

What is Beer Pong?

By definition, beer pong or cup pong is a game in which cups are placed on either side of the table, filled with beer. You score by tossing the ball from one corner of the table to the other cups filled with beer, and if you score, your opponent is supposed to drink that cup.

How to Play Beer Pong: Step-by-Step

Like mentioned before, beer pong can be played with a different set of rules and regulations. A lot of things are similar, like the equipment required to play as well as most of the rules are also the same.

The setup of the cup pong game is quite easy. You arrange around 10-12 cups in a pyramid-style formation on each side of the table. The beer pong distance is measured by the stretch of the table which is around 8 feet, typically, and you can use the standard ping pong table or one of the beer pong tables.

Once arranged, you fill the cups with around 18oz or 16oz of beer. For children, you can change the format of the game by filling the cups with water; water pong is also quite common! You can, of course, change the amount of liquid as per your liking, it is not fixed.

In addition to cups and a table, you will also require a ping pong ball.

Beer Pong Bounce: What does it mean & How Does it Work?

There are conflicting beliefs over the inclusion of bounce. Some people prefer pinging the ball directly into the cup, others believe that it should technically bounce before landing in the cup.

Owing to its popularity, there are a set of official beer pong rules. We include the significant ones and you can search up all of the remaining ones, here.

The team with first possession will get one (1) shot. Each team will get two (2) shots for each turn thereafter, one shot per team member, subject to any other rules within.

To determine who chooses shot vs. tableside, if not otherwise dictated by tournament-specific rules, players may use any agreed-upon method, such as flipping a coin or playing “Rock, Paper, Scissors” to make that determination. If the players are unable to agree upon a method, then they shall use one game of “Rock, Paper, Scissors.”

Players are allowed to make a shot via bounce. If the bounce shot is made, two cups are eliminated and the defending team chooses which cup can be eliminated.

However, if a person declares that they will be taking each shot on bounce, then the elimination rule can be taken out of the game.

Distractions are permitted, as per the official ruling of beer pong. However, players cannot cross the plane of play with any part of their body, clothing, or objects.

You are also not allowed to interfere with the vision of the opposition team. For reading the remaining official rules, you can refer to the official beer pong website.

The college rules of beer pong are a bit different from official beer pong rules. The main differences are in the fact that for college beer pong, you use actual alcohol instead of water. Secondly, you are bound to drink the alcohol, once the ping pong ball lands in one of the cups. The whole point of the game is to keep your focus despite being tipsy.

Some of the major college beer pong rules are as following:

You can do this either with a simple rock, paper, scissors. Or, choosing the most commonly used method: eyes. This is when both the players are to make the first shot by maintaining eye contact.

If you make the shot and your opponent does not, you decide whether to go first. If both miss, they keep on going as long as one hit and the other one misses. Also, the cup is NOT removed during this phase of the game.

The elbows and the wrists should be kept behind the line of the table. You can decide which one is in effect before starting the game. It is considered to be an unspoken rule, and yes it applies to females, as well.

You can request the opposition to re-rack your cups, twice per game. This has to be done at the start of your turn and it may only happen when the remaining cups are left in the amount of 6, 4, 3, 2. The last cup, if requested, can always be pulled back and re-centered.

This is one of the cooler rules of beer pong. It is also considered to be an unspoken rule given the sneakiness of it.

A death cup is when the ball lands in the cup and the opposition pick it up to drink. As long as the entire contents of the cup are not finished with the first ball inside, it is considered a death cup. If the opponents shoot and make the cup during you lifting the cup and drink from it, you automatically lose the game.

If you shoot and make two cups in a row, you are on heat. However, if you make another one, meaning you have three in three, you are considered to be on fire. You get to keep shooting until you miss.

Once a team has made all of its cups and immediately on the next turn, the opposition also completes their cups, then the game goes into overtime.

Overtime consists of both the teams setting up 3 cups in the same triangle format using the same beverage to fill them up. The team who hit the last cup first shoots first in overtime and the same rules apply.

There are many different ways to play beer pong and we have listed some of the really fun ones:

Once the team has eliminated the last beer cup of the opposing team, they have not won, yet. The defending team gets a shot at the redemption round, where they have the opportunity to eliminate the remaining cups with each player getting a turn. If they make it, the game is forced into overtime. If they don’t, they are forced to drink the contents of the remaining cups, as well.

The Island Beer Pong rule is when you have a single cup alone, while all other cups are touching each other. If you call the cup and make the shot, then all of your remaining cups are removed. However, if you miss it, then your partner loses the next shot.

If you hit four cups, including the triangle pointers and the one in the middle, without hitting any other, you automatically win the game. This is because if you eliminate these four cups, it forms a ring of fire or a circle and that is considered curtains for your opponent!

Beer Pong Cornhole is when you use a cornhole table to place the beer pong cups inside the cornhole. The rest of the game remains the same and you can have much more fun playing it this way.

Beer pong with paddles or most commonly known as Dartmouth Pong is a game in which you hit a ping pong ball inside the oppositions’ cup using a ping pong paddle. The remaining rules of the game are the same as normal beer pong. This is considered to be a slightly tougher version of beer pong.

How do you get good at beer pong? Are you looking to improve your game and shock your friends the next time you play beer pong? Are you afraid of losing so many games on the trot because you get drunk a little too quickly? Not to worry, we’ll help you out with a few tips!

The most important tip of all is choosing your partner wisely. Make sure you team up with someone who has a good throw and does not get tipsy easily.

The best tip I can give you is practice, practice, and practice. Keep throwing and improving your aim. Do not ever say no to a game and do not let defeats or trash talk get to you!

It helps to be sure about what you want. Do not change your aim mid-way, make sure the cup you are targeting is the one your ball is hitting.

We answer some of the most frequently asked questions about beer pong.

How many cups do you need for beer pong?

Each team has to make ten cups and at one time two teams are playing. So, for a single game, you need 20 cups.

What is Death Cup beer pong?

As explained above, a death cup is when the ball lands in the cup and the opposition pick it up to drink. As long as the entire contents of the cup are not finished with the first ball inside, it is considered a death cup. If the opponents shoot and make the cup during you lifting the cup and drink from it, you automatically lose the game.

How many balls are needed for beer pong?

What a sexist question, girls can, indeed, play the game! Just kidding, you need around four balls to play beer pong. Two per team.

What is a celebrity shot in beer pong?